If you’re not digital, you need to be

For any business to reach it’s full potential in 2018 and beyond, you’ve got to get digital!

What do I mean by that?

Well, first of all, you’ll need a website.  That’s a no-brainer.  You can either pay someone to do it for you, or you can do it yourself.  If you’ve never done it before, it is easier than you might think.  You don’t need to just be an online business to need a website.  All businesses need a website. It need not be complicated, but you’ll most definitely need one.

Find out how to build a WordPress website in 30 seconds here.

To put it in perspective for you, Hootsuite (a huge social media management platform) and We Are Social (an international creative agency) have released their report “Digital in 2018”, showing the digital trends and uptake across 239 countries.  It is astounding.

Here is a snapshot:

Key findings from the report include:

Now, to get your brand and your messaging out there, social media is a must.  Social media has exploded and won’t be slowing down any time soon!  With over 3 billion people across the globe on social media, you can’t afford to ignore it.  Make the most of this rapdily expanding group of people, who are looking for your content.

Here is a snapshot of social media use: 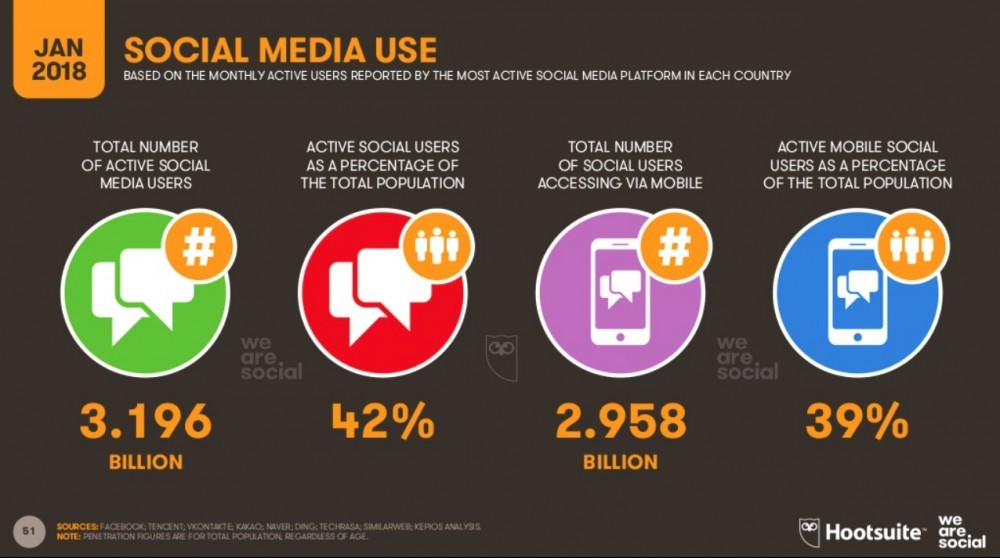 That’s a bit insane!  Over 3 billion people on social media, representing 42% of the total population!

Take note that 39% of the total population access social media via mobile, so make sure your them is mobile friendly.

So which media platforms are these 3 billion people accessing?

Facebook can be both for personal use and for business use, where users can set up a business account that is linked to their personal account.  You can add other users as ‘friends’, sharing with them photos, videos, links and messages.  Facebook Messenger is now huge with 1,300 million users, which is up by 30% since 2017.  Of all of the platforms, I like Facebook the best.

Pinterest has 200 million users in 2018, up by 33.33% from 2017.  Depending on your business, you either love Pinterest or struggle to find how it’s useful.  I fall into the ‘struggling’ group on this one.  That said, I am getting more used to Pinterest, and now I have a new found love for Canva (see my page on business branding), I find myself creating social media images and inforgraphics with my branding on them, so that I can post them to Pinterest.  I am yet to notice much success with Pinterest, but plenty of people who have online businesses swear by it as an excellent source of traffic to their site.

Tumblr was created in 2007. Of all the social media platforms, it seems to have experienced the most rapid growth, with 794 million users in 2018, up by 44.36% from 2017.  Tumblr is a social media site that allows people to share their blogs.

Some other important social media platforms you can’t ignore:

For anyone who wants their material ranked in Google (hello, that’s everyone!), then you want to be publishing every single one of your pages and posts on Google+ (obviously owned by Google!).  This will help your site to gain trust with Google, and get your pages indexed.

Update November 2018: Google has announced that Google Plus will be closing down over the next 9 months. This follows a security breach that was reported in March 2018.

LinkedIn has traditionally been for professionals and businesses who want to get connected with other professionals.  It has evolved fairly rapidly in to much more than that, and now people are starting to share their content more and more.  The content is largely business and work-related.  Be sure that if you use LinkedIn, you keep your posts professional. If your post looks spammy, you will be unfollowed very quickly. At the end of the day, it is for professionals, so make sure anything you post adds value.  That can be said across all platforms, but particularly for LinkedIn.

YouTube was created in 2005 and is now owned by Google.  It’s a platform where you can share videos, upload your own videos, watch and rate others’ videos, and subscribe to users.  It is absolutely massive, with 1,500 million users.

WhatsApp has been around since 2009. It’s an instant messaging and VoIP (voice over IP) service.  It is owned by Facebook.  They now have a WhatsApp business app, so that businesses can interact with their customers.   With 1,300 million users, it sure is an active platform!

This is an invitation only platform, still in the beta stage. Is both social and professional platform with an added bonus of an affiliate program.

A summary of the key global social platforms

Here’s how the social platforms all stack up: 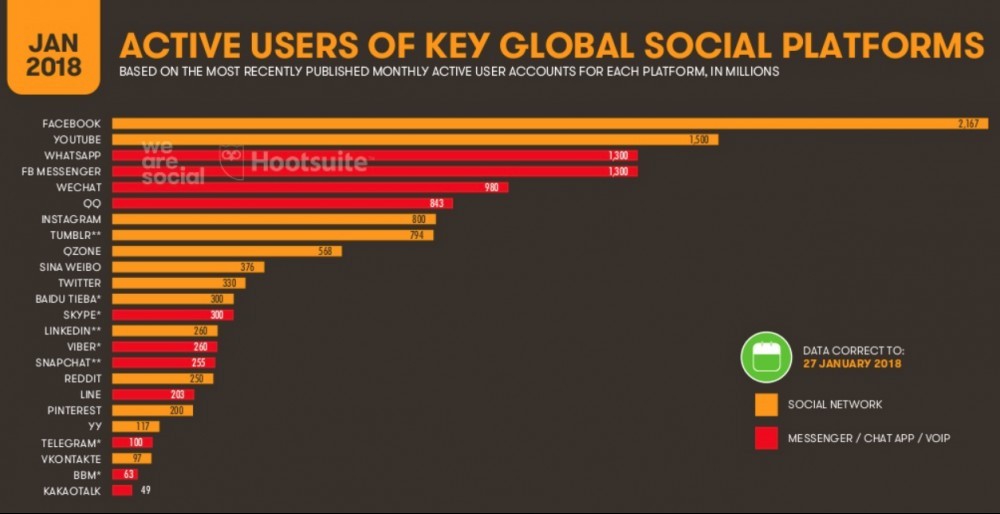 All the social media platforms are free.  Just sign up and away you go.

Don’t be scared by social media.  It’s easier than you think, but you do need to make a concerted effort to do it.  Just choose one at a time.  Sign up, and become familiar with what they offer and how it all works.  You will find the ones that work for you and the ones that don’t.  I would encourage you to persist, and maybe stick with the top 5 that you like the best.

Which social media platform have you had the most success with?  Leave me a comment below!

Please log in again. The login page will open in a new tab. After logging in you can close it and return to this page.